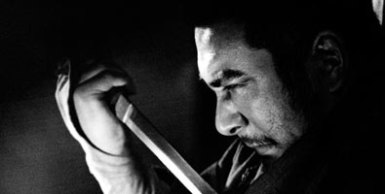 Man am I totally addicted to this series,  not least of all because of the Acting Talents of Shintaro kintsu. He is irreplaceable as the character as he embodies the role not only as an actor but in spirit too. Since he himself developed the character over 26 movies and a 4 season TV series I’d say there is nothing that compares to his idea of Zatoichi. A humble, charming, killer.

The series of movies starts off with our character relatively unknown in the world he lives. He’s blind and because of this he is automatically a masseur in that period of time since masseurs couldn’t see the body of those they massaged. Zatoichi or Ichi, as he would introduce himself as, is also looked down on for his blindness not only because it is seen as a physical disability but also in that era blind people were viewed as having mental disability also. The two went hand in hand. Ichi doesn’t try to correct the ignorant masses. He plays along with their preconceived notions until he is left no option but to cut someone down by removing his sword hidden within his cane.

From early on in the series Zatoichi is generally a very kind spirited man who hates killing people. He hates been forced into situations where he must defend himself and fight others. From the very first movie this is plainly clear when he buries his sword with the man of exceptional sword skill he was forced to kill in a gangster feud. This not only demonstrates the peaceful tenacity of the character but the wonderful acting abilities of Shintaro whose facial expression changes to that of sorrow the moment he hears his opponents heart stop.

This is the curse of Zatoich. It seems whomever he befriends and respects he must end up killing. His friend, his master, his brother, his cat. No not his cat but he can’t own a cat for he would likely be forced to fight it too. It’s no wonder that he calls himself “dirt”. His exceptional sword skill makes him a wanted man and wherever he goes trouble follows.

The first four films are my favorite of the series as we see the character as someone who is very opposed to killing and only fights when absolutely necessary. As the series progresses his character takes on a somewhat comical tone as he cheats people at gambling, falls into holes and puts too much mustard on his Oden, which I have to say was hilarious because of how Shintaro plays it. But then again, this is a man who was a rogue in real life too. A famous story of his life tells of a time where he was caught with drugs in his underwear at the airport to which he replies that he wouldn’t take underwear next time!

After movie 10 Zatoichi takes on a Darker Tone. In movie 11 Zatoichi executes two unarmed men. The men deserved it in Zatoichi’s view but it shows a shift in the characters nature and is quite surprising to see him kill two people with their backs turned to him. The character also starts to develop flaws, he makes more mistakes, he starts to lose at gambling. He reflects inwardly on his own nature and questions the killing he has done and is caught in-between not killing people to picking up his sword and defending innocent people. There is no place of comfort for the character in his surroundings and in his mind. He is a wanderer and in the time he lives he is a law onto himself. He becomes more comfortable with “getting involved” and is quite the investigator at times when he wants to be.

Lots of the movies deal with Yakuza gangs or corrupt lords, some have a little extra introducing us to people Zatoichi once knew. One movie in particular ‘Zatoichi’s Cane Sword‘ adds a nice bit of mythology to his sword.

After movie 16 Shintaro Katsu started producing the movies and there is a slight change in tone. For the first few movies their is a musical number along with a soundtrack of Shintaro himself also singing.  The character becomes more flawed and starts losing even at gambling. There’s more of a realistic edge to the character although at the same time I felt something is lost as these changes are more assertive and Zatoichi the Yakuza is a defined more.

As I was more than halfway through the series I started to watch the ‘One Armed Swordsman‘ films starring Jimmy Wang. They are less realistic than Zatoichi movies but there’s a very interesting meeting between both character’s in movie 20 ‘Zatoichi Meets the One Armed Swordsman‘. The film is an interesting blend of both series of movies but more grounded in Zatoichi’s world. The characters lack of understanding of one another leads to a fateful final battle. There is said to be an alternate ending to this which Jimmy Wang himself confirmed but it seems to be lost like so many other cuts and altered scenes in Hong Kong cinema. 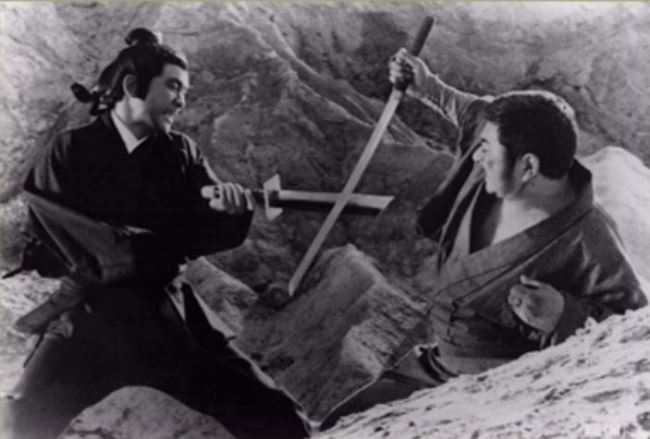 In 1971 as Zatoichi was having his adventures in Japan his American counterpart begun his in the movie ‘Blindman‘ which I have to say is rather entertaining and forgoes the use of the usual Zatoichi cliches. Our Hero is a Charles Bronson type of character, he doesn’t have the martial skills of a fighter and he has no hidden sword in a caine. All he has is a rifle which he uses unconspicously as a waking stick from time to time and also a bunch of dynamite. The story goes along at a compelling pace and there’s hardly ever time to get bored with a nice mixture of action and humor.

Movie 24 ‘Zatoichi in Desperation‘ introduces another turn to the series with Katsu himself taking over as Director adding his own visual style which i found refreshing and an interesting take. It’s again an even darker story with Zatoichi not exactly being able to save the day and in the last 20 minutes I seriously thought he was screwed more than at any other time in the series run.

‘Zatoichi at the Blood Fest’ AKA ‘Zatoichi’s Conspiricy’ is the 25th and final film in the “old school” run of Zatoichi film series before Shintaro moved onto the Zatoichi TV series. It’s a nice book end to the series too with Zatoichi finally returning to his hometown after 20 years to find his childhood friend has become corrupt and the woman who raised him has died. He plays more of the Hero returning to his Hometown to clean it up and takes a rather active and aggressive role against the criminal elements this time round. Don’t mess with this guy.

For the moment I shall end my review of the movie series here. It has been an interesting Journey of film viewing with Zatoichi, seeing him evolve from a reluctant killer to one who no longer thinks twice is perhaps not only a sign of a change in the character but the actor himself. Zatoichi’s popularity might be reason for the humble side melting away to a raw action hero type of role. A bit like Godzilla. The character of Zatoichi has had a big (if unknown) influence on cinema. It is said that George Lucas’s idea for the lightsaber was inspired by Zatoichi’s quick draw method.

Update: (16Aug13) If you’re looking to start this journey, Criterion will be releasing a box set of all 25 films in November 2013. The set looks amazing http://www.criterion.com/boxsets/1012-zatoichi-the-blind-swordsman

So where does the future of Zatoichi lie?
Sonny Chiba, under his new alias Wachinaga Rindo, was set to direct a film called Za Toichi (which is of itself a play on words about illegal loans) about a loan shark that is blind. He also previously had tried to do a project called ‘Matta Ichi’ about Ichi’s long lost brother which he has been trying to get it made since about 1995. Takeshi Miike has done a stage show of Zatoichi and I think any film buff knows that a Mr. Tarantino is itching to make one someday.

Whatever the case the legacy of Zatoichi is sure to live on not just because of the character but the actor behind the role and that’s Shintaro kintsu.

Favorite Quote: “well sweet mama i guess the sun don’t shine on the same dogs ass all the time” – Zatoichi

This entry was posted in Asian Cinema, TV/DVD/Video/BluRay. Bookmark the permalink.