Here is a film that does not directly interpret the life story of Ip Man but gives us the essence of it through Kung Fu.  Much like ‘The Great Gatsby‘ the grandmaster is a stunningly beautiful film that is less about people and more about a way of life. The life of a martial artist.

The story partly revolves around Yip Man who was a practitioner and master of Wing Chun and best known as one of the late Teachers of Bruce Lee. The other part of the film revolves around Gong Er, who practices Bau Gua and a character known as The Razor who practices Bai Chi. Each martial art representing different aspects of Kung Fu as a whole, each art being the most significant in different parts of China. The characters themselves are in their own way trying to attain the highest level of Kung Fu skill though, through such high achievement they would also sacrifice something of their own personal life.

This is definitely a Wong Kar Wai movie but also very different from what he has done over the past few years. Some argue it’s not so much a martial arts movie but it’s the most deeply philosophical Martial art’s movie I have ever seen and as someone who has done training in Chinese Martial Arts I do find a level of understanding that maybe others won’t.

The background setting of the film is the War between the Chinese and Japanese and while I’m kind of getting sick of seeing movies that are set in this period I don’t think the Grandmaster flaunts it blatantly in your face like other Kung Fu action movies starring Donnie Yen, do. since the movie is partly set in China and since it does reflect true events in Ip Mans life it makes it a far more personal story for Ip Man. There is also a scene which Ip Man challenges another Master for a piece of Bread without breaking it in which Ip Man proposes that much like China it should remain a whole. You can see what country this movie is aimed at.

The cinematography is beautiful but at times a little too reminiscent of Christopher Doyle’s work. The music soundtrack too is typically fantastic and haunting. The fight choreography is well done having such people as Yuen Woo Ping and the late great Lau Ker Leung working on this film. The fights themselves may come across as ‘Crouching Tiger Hidden Dragon’ to some but I think they look unique enough to not be identified with other Kung Fu movies of fast action or slow pace romanticism. I would slightly criticize the fast cuts in some fight scenes, but that’s just my personal preference of wanting to see the entire fight without cutting from a pre-punch shot to a punch from a different angel. Ah film…

The love story. There isn’t one and there is. It’s not the focus of the film so it’s something that comes and goes but is never really established. There are a few touching scenes towards the end of the film that give us a story between Gong Er and Ip Man but since we never see a real beginning to this relationship the end is a little bit unfulfilling.

Tony Leung and Zhang ZiYi do give knock out performances and Ziyi has certainly matured a lot as an actress. Tony Leung is on a whole other level though. He is more subtle than ever and that’s not only the character, that’s the work he has put into it. Almost 5 years of training, up to 6 hours a day and an arm broken twice. Having trained extensively and learned the knowledge of Wing Chun masters in HK and China he has something of a diamond edge to him unlike before. I first noticed this about a year before in the film ‘The Great Magician’, he’s transformed, there’s a confidence that shines without even the need to show it.

As for the Ip Man character it’s not a direct interpretation. He does reflect that period though and this is key to telling the story Wong Kar Wai wanted to tell. As with all Wong Kar Wai movies there are themes of love and loss that tie all his films together. There is also another thing that ties them together. Mr. Chow. Now in one scene of ‘The Grandmaster’ you see Ip Man having his passport photo taken in a suit very similar to that of Mr. Chow who we previously saw in ‘2046’, ‘In the Mood for Love’ and at the end of ‘Days of Being Wild’. Let me just squeeze this in here: Wong Kar Wai had toyed with the idea of Mr. Chow being a character in this, in fact being the writer of this Kung Fu story of Ip Man. Seeing Ip Man with that Hat on there is something a bit pulpy looking about that character and it does give some leeway for the dream like fight sequences if it were a story written by another character who sees himself as the Hero of his story and again meditating on his own life through Ip Man. 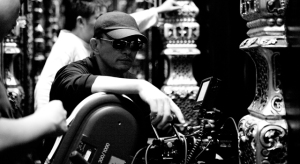 While I have seen the Chinese and Japanese Cut of the movie I have not yet seen the American cut but I hope it’s not changed too much to suit the audience of the US. It’s a little too common these days for films produced in Asia and America to be re-cut in order to gain a larger audience. To be fair I think the audience deserves more credit when going in to watch a movie from another country. I think foreign films should represent the culture of that country. I don’t think they should pander to a certain audience. Our interest in other cultures grow from a desire to understand that which is new and foreign to us. If you remove that then what’s the point of the movie? Even Wong Kar Wai himself said that he made this movie through the eyes of someone who doesn’t know much about martial arts. Surely that can go for the rest of the general public too.

There is however at least a 4 hour movie in there somewhere and a lot of scenes, including action scenes were cut. As we know, Wong Kar Wai likes to cut and change his movies (more on that in another entry later) but usually the final international product is left intact for everyone. Clearly this has changed with ‘The Grandmaster’ and it seems the action and emphasis on the Ip Man character will feature more prominently in this US cut.

I have anticipated the movie since as far back as 2008 but in reality it’s been in the planning stages far far longer.  As with all Wong Kar Wai movies it holds gravitas and high expectations unlike other movies, for the Director has carved out his own genre. I like it a lot and it grows on me more and more. Again I feel I want more but I guess that’s quite a satisfactory thing for a Director to leave his fans with. As for future films between Tony Leung and Wong Kar Wai, who knows. Tony has mentioned about taking a break from movies and from making movies with Wong Kar Wai. It’s a nice film to retire their film relationship on, Tony has played the Teacher of his Hero Bruce Lee and with this film both Actor and Director have come full circle in telling this tale. Whatever they do in future be it small or great I wait with as much anticipation as the next person. Till then there is a stunning filmography of theirs I’m in love with, which has literally had an impact on my life, which I will go back to again and again.

Favorite Quote: “In life, as in Chess a move once made stays on the board. What we have is simply fate. Your father once said to have faith we must keep the light burning. I hope to see the 64 hands again one day.” – Ip Man

This entry was posted in Asian Cinema, Cinema, TV/DVD/Video/BluRay. Bookmark the permalink.

1 Response to The Grandmaster