2 Years on and we finally had a resolution (one of many) to how Sherlock survived or might have pulled his magic trick off. At this stage does it really matter how he did it? I think the producers quite agree too. It’s more about the return of the world’s greatest detective (no, not Batman) and how people around him deal with that return.

The first episode of the series has a lot of well needed humor and Cumberbatch is definitely having the freedom to stretch himself in more comedic ways and rightly too since John Watson is in a far less humorous mood when Sherlock returns. The rest of the episode isn’t really about the underlying big mystery of a terrorist attack but just letting these characters chew scenery. It’s a nice change of pace but since these episodes are 90 minutes long I hope this won’t be the norm. I also hope Sherlock doesn’t take on too much of a action man/secret agent role and it won’t go beyond his motorcycle riding talents. It’s the man’s mind that attracts the audience at the end of the day.

It does seem the producers are poking fun at the audience though with the Empty Hearse group seemingly representing fandom on some level with all it’s speculations and obsessions. I kinda noticed the Moff doing the same thing in ‘The Day of the Doctor‘ with one of the character’s being a fan of the Doctor, albeit one that was rather stereotypical with her 4th Doctor’s scarf and inhaler.

Absolutely friggin hilarious. Probably the funniest episode of Sherlock so far. At first I thought it’s going to be another character piece centered on Sherlock and John since it’s John’s wedding. I had wondered if they could do anything outside of that. It did seem at first that was the case with some nice flash backs to previous unseen adventures they’ve had however half way through the “Game is on” and those flashbacks to previous cases become part of the larger mystery. Excellently put together. There was hardly anything in this episode that could be considered a throwaway line or scene. Besides a few continuity errors within the episode (watch Sherlock’s hands as he discusses his love of dance) the Direction was top notch and particularly well done were the out of focus scenes of John’s Bachelor night. The whole episode just came together beautifully and even had an appearance by ‘the Woman’. Love it love it.

This was a bit of a mixed bag for me but a lot of people seem to like this. It’s clear that during this series things have taken a more personal route with the actual mystery solving taking a back seat which I kinda miss. Things are definitely more character focused and this series has been John Hamish Watson’s series. First with him dealing with the return of Sherlock, then his wedding and finally discovering his wife isn’t who she claims to be. Drama has taken over the plot which in this episode consists of quite a few big plot twists and reveals all the way till the end. I liked this episode in parts. I loved that we finally see Sherlock in a drug den and that we see his darker and more human side, particularly with that killing.

Charles Augustus Magnussen is a nice update on the character and a bit of a play on certain media moguls. He is a bit of a Hannibal Lector type character not only because Lars Mikkelsen is brother of Mads Mikkelsen who plays Hannibal on TV but also because of his mind palace, an ability which the character of Hannibal Lecter has in the novels too. But i found his character overhsadowed as a villain by Mary Watson’s reveal. Having John’s wife turning out to be a secret assassin can come off as a bit of a wtf moment that makes you groan, but they make a good point about John being a man who seeks out dangerous situations and people.

The possible return of Moriarty I’m not sure i’m keen on. In the books his character only appears in 2 stories. Despite that he became a larger than life villain for Sherlock. I was glad he didn’t overstay his welcome when he departed at the end of season 2 because I wanted to see other villains besides Moriarty. It’s a challenge for writers to come up with things that can really test Sherlock. Bringing back Moriarty seems like a bit of a safe play, if they actually do bring that character back.

Clearly the show has shifted in another direction due to the popularity of these characters and the actors who play them. It seems that from now on we’ll see them evolve far more than they did in the previous 2 series. They might begin to develop some flaws but if they are planning to stick around on our screens for the foreseeable future then it’s natural. But I hope they don’t push the boundaries of believability too much beyond the show’s setting. Sherlock has come back from the dead, Moriarty has come back from the dead and John’s wife is a secret hit-woman. These things can go overboard…

For series 4 and 5 I hope they come along sooner. I expect to see another Holmes brother enter the show. Maybe played by Matt Smith? Morarity supposedly had a brother too which might explain ‘His last Vow’s ending. I also hope the Woman will be showing up again too.

notes: anyone catch the “blunt instrument” remark? James Bond and Sherlock co-exist in the same universe? 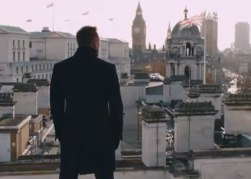 And don’t even get me started on this… 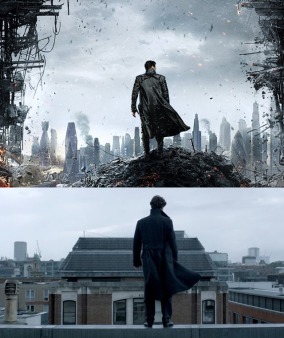 Favorite Quote: “We will never let you down and we have a lifetime ahead to prove that.” – William Sherlock Scott Holmes

This entry was posted in Benedict Cumberbatch, Sherlock Holmes, TV/DVD/Video/BluRay. Bookmark the permalink.